Nanoparticles can reveal information held by fingerprints that is currently inaccessible. In particular, they can be engineered to bring antibodies that bind with metabolites contained in the sweat of the fingerprint. These metabolites are breakdown products of the consumption of cocaine or nicotine. When the antibodies recognize the metabolite, they cause a colour change. This allows for “life-style intelligence”: that is, deducing elements of the lifestyle of people from the traces left on the things they touch. …. 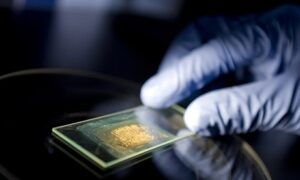 “My best guess is that the most promising application of nanotechnology to forensics lies in improving DNA analysis,” says Ian Turner. “Nowadays, analysing DNA requires a lot of time, money and multiple labs.” But, he points out, the main procedures – extracting, amplifying, separating, and sequencing DNA – have already been made quicker and portable, thanks to nano-techniques….
“A sea change is about to occur for forensic analysis, based on next-generation sequencing, and is all based on nano-scale techniques,” says McCord. Two of the most promising lines, he says, are recognising what tissue is the origin of the DNA found on a crime scene (skin, blood, saliva, semen …) and deducing some phenotypic features of the owners of that DNA: geographical origin, colour of the eyes, skin, and hair, stature, etc.

So, going back to the crime scene of the beginning, investigators would get to a broader range of conclusions with nanotechnology tools: whether the actors of the crime were under drugs, when the blood was poured and the story of the document.