No, ‘Rogue One’ isn’t anti-Trump; It’s about selfless sacrifice and ‘hope’

December 28, 2016
Let’s be clear — “Rogue One: A Star Wars Story” won’t replace “The Empire Strikes Back” as the best film in the beloved franchise. 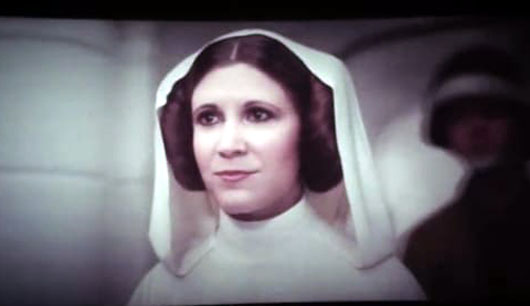 Carrie Fisher in closing scene of ‘Rogue One’: Sacrifice and heroism delivered ‘hope’ to the Rebel Alliance.

That doesn’t mean “Rogue One” isn’t both satisfying and grittier than any film in the “Star Wars” canon. … We finally learn how those Death Star plans were stolen in the first place. …

What matters the most about the “Star Wars” saga is the white and black hat storytelling. Sure, the shades of the Force can be confusing, to say the least, but the stories always hinge on good versus evil without the hand-wringing seen in some modern tales. Not only does “Rogue One” embrace that concept, it doubles down on it. …

News outlets eagerly weaponized the movie against Trump supporters. First, it magnified a few yokels protesting the movie over alleged late-minute additions that mocked the president-elect. Said changes never happened. Then, reporters claimed Trump Train passengers hate the fact that the film offers such ethnic diversity. Again, it’s unlikely those folks represent any large swath of movie-goers. The film itself is free of overt politics.