Is a silent God speaking through the weather?

“With four big hurricanes, a powerful earthquake and wildfires, it seems that nature recently has just gone nuts,” an AP writer surmised.

There can be no denying that the late-August, early-September series of natural disasters have riveted a nation’s attention, even distracting attention from the crisis in North Korea. 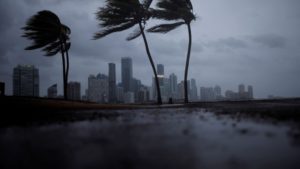 The combination of apocalyptic events have fueled a largely-unreported “prepper” movement of Americans stocking up on supplies needed not only to survive the imminent stormy weather but a world without electricity and the Internet in the aftermath of a nuclear EMP attack, devastating war or violent revolution.

What is going on?

Hollywood actress Jennifer Lawrence said the problem is not an act of God but rather “nature’s wrath” at the election of Donald Trump.

Pro-global warming meteorologists like Jeff Masters say “nature has gone crazy” and that “extreme weather” is man made.

Evangelical Christians like Thai-Australian Pastor Steve Cioccolanti of Discover Ministries are, however, taking a closer look at Revelations 12 and the “signs” of the times.

The daughter of Evangelist Billy Graham, Anne Graham Lotz, issued an Internet warning this summer about the “signs” of the “end-times and God’s judgment on earth” including the total eclipse in August. She referred readers to a prophetic explanation by Steve Cioccolanti who conducts a popular video ministry.

Lotz quoted a passage in the Book of Joel about the prophet Jonah’s warning to the King of Ninevah:

“The sun will be turned to darkness…before the coming of the great and dreadful day of the Lord.” — Joel 2:31

“A few years ago, I was teaching through the book of Joel when the ancient words of his prophecy came up off the page,” Lotz wrote. “I knew with hair-raising certainty that God’s severe judgment was coming on America! I have taught Joel several times since. Each time has served to confirm with deep conviction that God is warning America of impending disaster and destruction.”

In the Bible, the prophet Jonah warned the people of Ninevah of God’s wrath at their wicked ways which would bring their impending doom. Upon seeing a total eclipse, Ninevah saw the error of its ways and took the prophet’s warning to heart. They repented and were spared destruction.

The new-age secular prophets of doom are calling for repentance to their “progressive” rulers for being guilty of voting for Trump and for using fossil-fueled modes of transportation.

And then there are the modern Christians who say that the God of Abraham, Isaac and Jacob is still alive in a nation that has purged Him and its God-fearing Founding Fathers from their institutions.

They quote the book of Galatians in the Bible’s New Testament (written after the coming of Jesus): “Be not deceived; God is not mocked: for whatsoever a man soweth, that shall he also reap.”