Einstein on Jesus Christ: ‘His personality pulsates in every word. No myth is filled with such life’

Albert Einstein was born in Germany on March 14, 1879. He began teaching himself calculus at age 14.

With a doctorate from the University of Zurich, Einstein wrote papers on electromagnetic energy, relativity, and statistical mechanics. 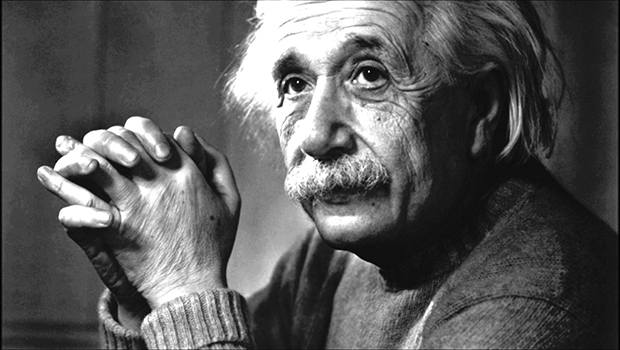 “I have nothing but awe when I observe the laws of nature. There are not laws without a lawgiver…”

Einstein predicted a ray of light from a distant star would appear to bend as it passed near the Sun.

When an eclipse confirmed this, the London Times ran the headline, November 7, 1919, “Revolution in science — New theory of the Universe — Newtonian ideas overthrown.”

In 1921, Albert Einstein won the Nobel Prize in Physics.

Describing the theory of relativity, Albert Einstein said: “When a man sits with a pretty girl for an hour, it seems like a minute. But let him sit on a hot stove for a minute — and it’s longer than any hour. That’s relativity.”

Einstein’s first visit to the United States was to raise funds for Jerusalem’s Hebrew University.

When the National Socialist Workers Party took control of Germany, they barred Jews from holding official positions or teaching at universities.

Jewish poet Heinrich Heine prophetically penned in 1822: “Where they burn books, they will, in the end, burn human beings too.”

A current instance of this was reported in the Breitbart News article “ISIS Burns Books at Mosul Libraries” (February 5, 2015):

“The Islamic State … raided the Central Library of Mosul to destroy all non-Islamic books. ‘These books promote infidelity and call for disobeying Allah,’ announced a militant to the residents. ‘So they will be burned.’ Militants targeted the library at the University of Mosul. They burned science and culture textbooks in front of the students.”

“I am absolutely convinced that no wealth in the world can help humanity forward, even in the hands of the most devoted worker in this cause.

The example of great and pure individuals is the only thing that can lead us to noble thoughts and deeds … Can anyone imagine Moses, Jesus, or Gandhi armed with the moneybags of Carnegie?”

Einstein stayed in the United States, becoming a citizen in 1940.

Einstein’s theory of relativity, E=MC2, is the basis for applying atomic energy.

His warning that Nazis could create the atom bomb led President Franklin D. Roosevelt to set up the Manhattan Project.

In November of 1952, Prime Minister David Ben-Gurion asked Einstein to be Israel’s 2nd President, but he declined due to age, dying less than 3 years later.

Being “deeply moved” by the offer, Einstein replied: “My relationship with the Jewish people became my strongest human tie.”

The periodic table’s 99th element, discovered shortly after his death in 1955 was named “einsteinium.”

“I assert that the cosmic religious experience is the strongest and noblest driving force behind scientific research.”

Albert Einstein stated: “God Almighty does not throw dice.” and “Before God we are all equally wise — equally foolish.”

“My religiosity consists in a humble admiration of the infinitely superior spirit that reveals itself in the little that we, with our weak and transitory understanding, can comprehend of reality. Morality is of the highest importance — but for us, not for God.”

Einstein stated in an interview published in G.S. Viereck’s book Glimpses of the Great, 1930: “I’m absolutely not an atheist … The problem involved is too vast for our limited minds.

“We are in the position of a little child entering a huge library filled with books in many languages. The child knows someone must have written those books. It does not know how. It does not understand the languages in which they are written.

“The child dimly suspects a mysterious order in the arrangement of the books but doesn’t know what it is. That, it seems to me, is the attitude of even the most i